Posted by Seaman Corporation on September 10, 2015

Burns & McDonnell, an international engineering, architecture, and consulting firm based in Kansas City, Missouri, released a new project profile featuring the state-of-the-art fuel storage facility at Point Loma, CA. A copy of the TechBrief can be viewed below.

In addition to the U.S. Navy fleet, DFSP Point Loma services a number of other agencies including the U.S. Marine Corps Air Station Miramar, the 11th District of the US Coast Guard/Homeland Security, the National Oceanographic and Atmospheric Administration (NOAA), and Military Sealift Command (MSC). The project upgrades were necessary to modernize existing fuel storage infrastructure with 21st century operation requirements in mind and to maximize sustainable practices. In addition, the project sought accreditation from the U.S. Green Building Council (USGBC) for Leadership in Energy and Environmental Design® (LEED) status.

The Point Loma facility was originally constructed in 1901 as a storage point for Navy coal. Since operations first began, the facility has modified and expanded its infrastructure to accommodate petroleum-based fuels and increase use by air and sea forces. Tanks were added over the years for storage. Before this project was constructed, the site included 54 storage tanks, the last of which were added in 1954. Both aboveground storage tanks (ASTs) and underground storage tanks (USTs) provided storage for approximately 1 million barrels, or 42 million gallons. The location increased its service to provide more than 460 million gallons of fuel and oil to the many commands it served by 2003. Most of the original tanks, constructed with riveted seams, were leaking at various rates. As a result, the DFSP command actively extracted fuel and contaminated water from site soils. Replacing the tanks was necessary
to prevent further contamination and fuel loss.

Initial construction included the demolition, or closure in place, of all existing ASTs and USTs and removal of containment berms. Old material and equipment were used to the extent possible. Located on a hillside, the site underwent major grading modifications to better accommodate the new facility and redirect stormwater, including the construction of new stormwater basins. The site soils were remediated to remove fuel and oil contaminants. Where possible, existing vegetation was left in place and porous surfacing material, such as crushed aggregate, already on site was used as ground cover. Eight new ASTs were installed during construction, each with a storage capacity of 125,000 barrels (Image 2), which primarily store jet fuel (JP-5) and marine diesel fuels (F-76). Other major new structures included a pumphouse, a truck load/unload facility, a lube oil storage and transfer facility, a fuel oil recovery (FOR) facility, which included a 25,000-bbl AST receipt tank and a 10,000-bbl issue tank, and a two-story control tower near the existing fueling pier.

With demolition of the existing earthen embankments, new containment structures were needed. Exposed concrete vertical dike walls were used for perimeter enclosure, and flexible membrane liners (FMLs) were selected in lieu of concrete floor for use as secondary containment. FMLs offer a number of advantages over concrete in this application.

Rapid installation. FML containment on nearly 12 acres was installed in less than 25% of the time required for concrete floors.

Reduced maintenance. FMLs do not require a sealant along the joints/seams to be applied or maintained as concrete does. Repair of FMLs is a simple, inexpensive process that can be done with patches applied by hot air welding or adhesives.

Guidance for the design of secondary containment under fuel storage tanks is provided in UFC 3-460-01. Product selection direction is given in the Naval Facilities Engineering Command’s (NAVFAC) Unified Facilities Guidance Specification (UFGS) Section 33 56 13 15. The UFGS guidelines call for reinforced thermoplastic urethane (rTPU) underneath because of its superior long-term resistance to chemicals, construction damage, a broad range of fuels and oils, and gasoline and volatile organic compounds. The superior abrasion and puncture resistance of rTPUs increases the likelihood that the liner won’t be compromised during construction. More than 142,000 square feet of rTPU, manufactured by Seaman Corp., was used on this project. 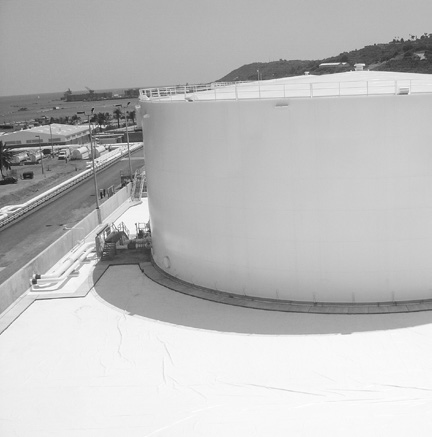 A scrim reinforced FML — in this case, a coated knitted polyester — was chosen for the containment liner in the dike enclosed area. The coating chosen was ethylene interpolymer alloy (EIA), which is an alloy of PVC, and a ketone ethylene ester (KEE), Elvaloy. A DuPont product, Elvaloy differs from traditional plasticizers in two significant ways. First, KEE is solid rather than liquid. Second, it is an extremely large molecule. While traditional liquid plasticizers have molecular weights in the 1,000 g/mol to 5,000 g/mol range, KEEs have molecular weights ranging from 250,000 g/mol to 400,000 g/mol. This is
large even in comparison to PVC molecules which range in size from 50,000 g/mol to 150,000 g/mol. The solid, dense KEE molecules are stable in the coating which has excellent resistance to chemical and UV action. This results in long-lasting performance of the finished EIA FML.

EIA liners have been used in exposed applications for more than 30 years of continuous service. EIAs have been used for secondary containment on more than 50 U.S. military installations. Traditionally, black liner was used. In recent years the trend has moved toward lighter colors to reduce surface temperature on the liner and tan has become a more common color. In same-site comparison tests, the temperature on the surface of black FMLs has been measured at 160 degrees F whereas the white liner adjacent to it has been measured at 130 degrees F. As a side benefit, light-colored liner is easier to clean, inspect and
repair as well. 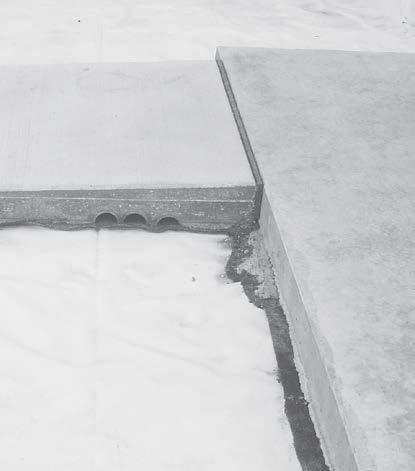 Because achieving LEED certification was a goal at the Point Loma facility, the decision was made to use a white liner (Image 5), which resulted in lowering the Solar Reflectance Index (SRI) of the liner to below 29 degrees F. This is the maximum allowed by the LEED “Heat Island Effect, Non-Roof” credit requirement. 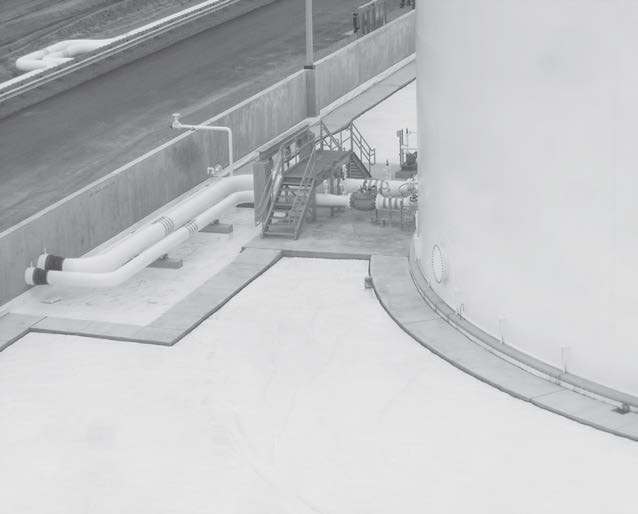 In addition to being UV resistant, an EIA provided the advantage of having a low coefficient of thermal expansion. This reduces the probability of liner failure due to environmental stress cracking caused by repeated expansion and contraction. It also meant that maintenance personnel would be able to access the facilities without the trip hazard posed by extreme wrinkling that can occur in geomembranes subject to thermal expansion.

The ability to leave the liner exposed resulted in additional savings in surfacing material and placement costs. In the event of a spill, the containment area would also be easier to clean up without having to remove and remediate the contaminated surfacing materials.

Guidance for the design of secondary containment in dike liner areas is also provided in UFC 3-460-01. Product selection direction is given in the UFGS Section 33 56 63. 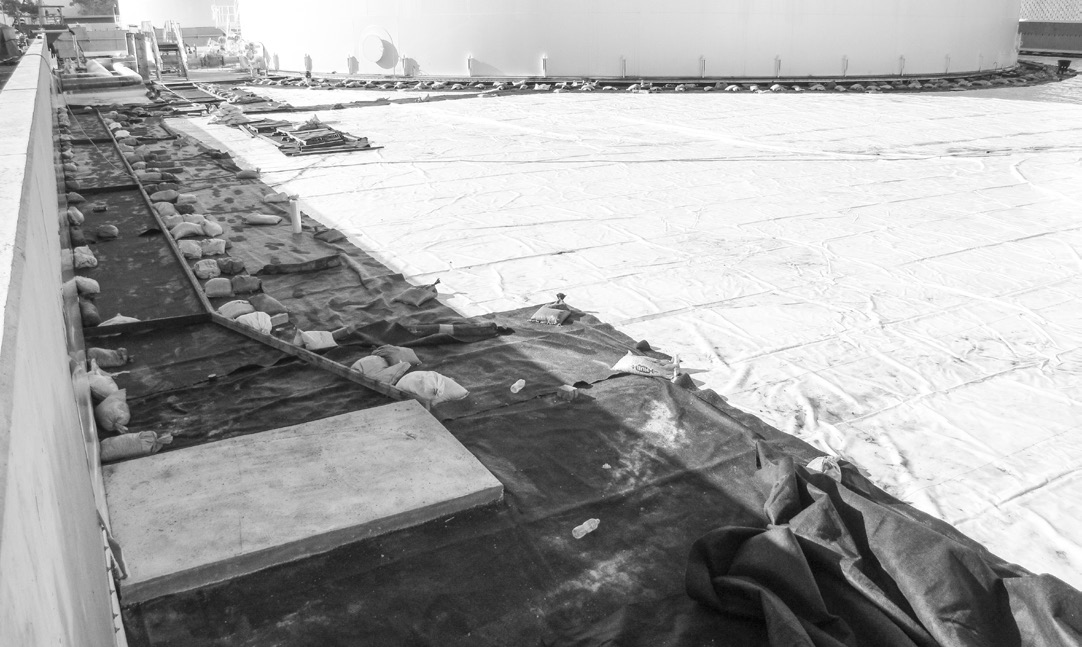 Image 6: Because of potential damage to the liner, traditional steel reinforcing bars and steel from stakes could not be used during construction of concrete sidewalk in the diked containment area.

Concrete sidewalks were used to provide access for operations personnel (Images 5 and 6).
Burns & McDonnell used the Corps of Engineers’ standard detail to construct the sidewalks. Because of potential damage to the geomembrane, a geotextile is placed on top of the liner (i.e., below the concrete). Rebar is eliminated from the construction by using fiber reinforcement instead (Image 6). The use of
sidewalks provides safer access for operations personnel and also helps to minimize potential
damage to the liner during operations.